Imitation is the Sincerest Form

First of all, I would like to take a moment to acknowledge the fact that today is 9/11, and that deserves immense recognition.
Would you believe me if I said I’ve had this in my drafts since December 5th, 2019? Wild. Anyway, better late than never, right? Without further ado, I present to you today’s post!

We've all heard the saying, "imitation is the sincerest form of flattery", right? Well, there's no doubt that nearly every company has 'imitated' another once or twice. While doing some roaming throughout the interwebs, I came across a few semi-surprising examples:

Email ThisBlogThis!Share to TwitterShare to FacebookShare to Pinterest
Labels: breyer, my thoughts

What I Wish I Knew Before my First Live Show

Now that we're at home and have so much time, why not prep for a show? That's what I've been doing a tad of!

So, you want to live show? Awesome, but how? Who are you going to bring? Where will you show? In what division will you enter? Hopefully, I can help clear up some of those questions :)

What are you Going to Bring?

This question is one that many showers face (no matter your experience level, it's always a good idea to continue to improve in any aspect you can). Some of my favorite videos that have helped me immensely are:

Typically, I tend to narrow down I bring by:


Placing your Model in the Ring:

This, arguably, is one of the most important aspects of showing, since how your model is presented is how it's judged! Don't get too freaked out, though, showing is meant to be a lot less stressful, admittedly, than many showers do (myself included). The main things to keep in mind are:

What is a Show Side?

At the minimum, it is the side that the horse is facing (all photos credit to IdentifyYourBreyer.com).  Some easier molds to tell the show side vs. the off side are these:

What Breed Should I Assign?

Now, if you would like to see more about how I assign breeds, you can find it here!

I hope this might clarify a few things, and I look forward to seeing any of y'all at shows after all this craziness :)

Disclaimer: I, myself, am not an expert by any means and am learning still. I consider myself to be (subjectively) new to the world of live showing, but I still believe I have some valuable knowledge to give. I hope this helped!
on April 23, 2020 1 comment:

Email ThisBlogThis!Share to TwitterShare to FacebookShare to Pinterest
Labels: halter showing, live showing, tutorials, what I wish I knew before

As you all may be aware, in my previous post in this series I discussed last year's auction models. Today, I'm going to be weeding out who I predict it may be! So... without further ado, here's Surprise, Surprise, Surprise:

Right off the bat, I think I can rule out any stocky molds, which eliminates Bobby Jo, Silver, the Mustang Mare, and Dundee. Yes, there are other stocky-ish molds out there, like the Fighting Stallion, but since he's not outright stocky, I'll keep him in the running for now.

Additionally, we can say bye-bye to previous surprise molds, which eliminates Smarty Jones and the Andalusian Stallion.

Now we're left with thirty molds (I counted the family sets as one, simply because it's unlikely that there would be a foal mold as the surprise, as well as I doubt there would be a family set for the Sláinte Surprise. Hmm... "Sláinte" means "cheers", so maybe that'll have something to do with it? I find it doubtful, but perhaps?

Next off, we can get rid of the current BreyerFest runs that have been announced (as of April thrid, 2020): Rhian, Cadell and the Show Jumping Warmblood.

Just based off what I think wouldn't make sense, I think we can also eliminate these guys: the Marwari, Five-Gaiter, Ruffian, "Foalzilla", Semi-Rearing Stallion, Fighting Stallion, Misty (and the foals), Proud Arabian Mare (and her foal), certainly Alborozo (since Breyer made 9,000, and then broke the mold), and Carrick. That's knocked off another ten from our list!

Left with sixteen molds, I think we still have a ways to go with predictions. Seeing as I think it'll be something European, I think it would be safe to say that Emerson (who's a Thoroughbred, which is an American breed), the Shagya Arabian, Ruffian, Duende (although perhaps he could pass as a warmblood or sport-type horse, but I don't think that's the most feasible option), Lonesome Glory, Bristol, the Andalusian Mare, and Valegro.

Nine molds left. Let's see! I tried to do some sleuth work and see if maybe there was a pattern with the gender of the surprise horses, to no avail. I did, however, notice that all the surprise models after 2013 have all been male. Maybe that's something? Who knows. Now we're down to the Clydesdale Stallion, Giselle, the Cantering Welsh Pony (with Newsworthy's tail- maybe Newsworthy is a possibility?), Goffert, Legionario III, Totilas, Croi Damsha, the and the Cleveland Bay.

Based off the fact that they seem to have a draft/sport horse theme, I figure it'll either be a draft horse, a sport horse, or a pony. Why pony? I say that because they might want some variation in the mix. I think they'd want to "cover all their bases". If I were to have to continue narrowing down this list (since I'm fairly indecisive and, therefore, don't want to), I'd probably pull the Clydesdale Stallion, Giselle, the Cantering Welsh Pony, Legionario III, and the Cleveland Bay.

So... in the order of who I think will be the Sláinte surprise, we have:
1. Croi Damsha 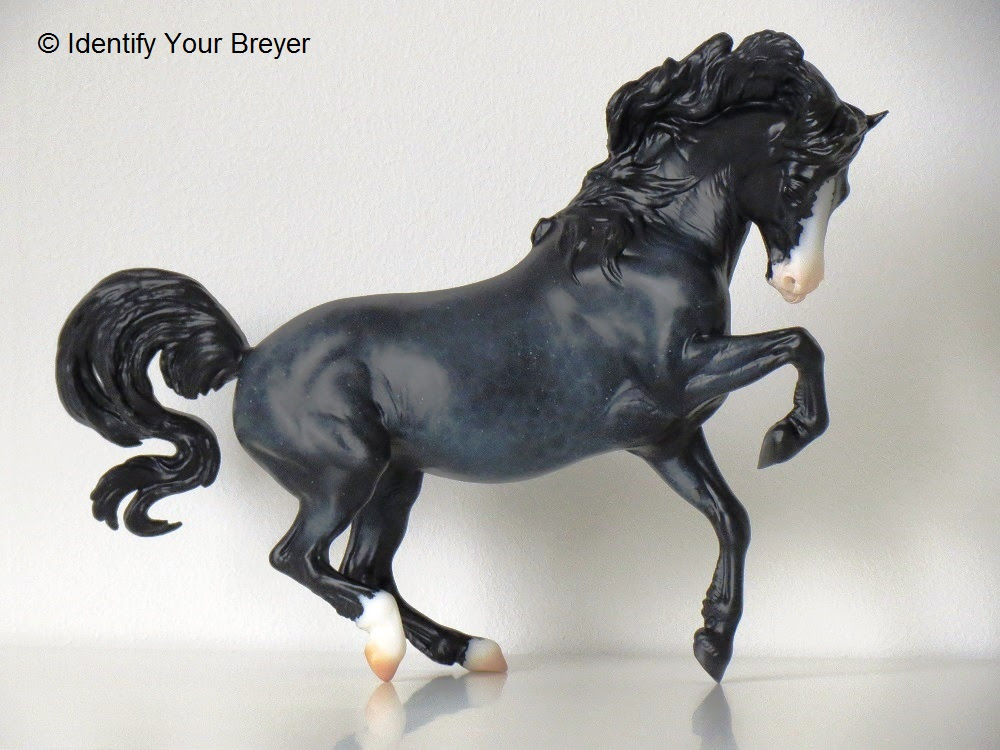 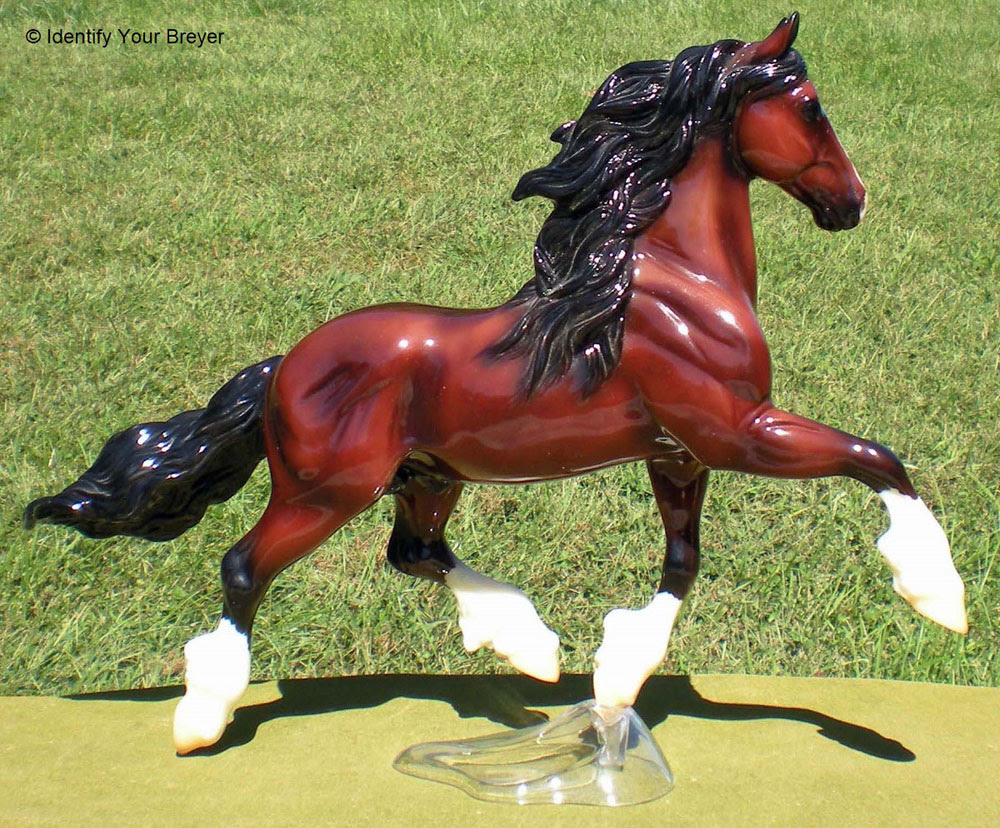 Now, let me just tell y'all that if it's Croi, my wallet's going to take a hit. If it's Totilas, it'll still probably be a teeny ding in my model savings, and if it's Goffert, I don't think I'll absolutely love all of them, so I'll be okay. With that being said, I have never owned a single surprise horse to date. Well, I guess we'll see, won't we? According to a friend, Teagan, who messaged me on Instagram with her guess, she agrees that the most likely contender, in our opinions, is Croi Damsha.

Also, little did I know, when I wrote a big chunk of this that. as of yesterday, April 13th, BreyerFest is moving online. Well, we'll certainly be curious as to how that would work out; Breyer, I have faith in you, though!

With BreyerFest being just months away, I figured I'd begin my BreyerFest series! Let's start it off with some commentary, regarding the surprise model! So, if Breyer follows the pattern of using a mold from the previous year's auctions, which they seemed to have strayed from last year, then perhaps my guess might be correct? Only time (and the BreyerFest blog, after-the-fact) will tell!

First up, we have the Chalky Emerson! 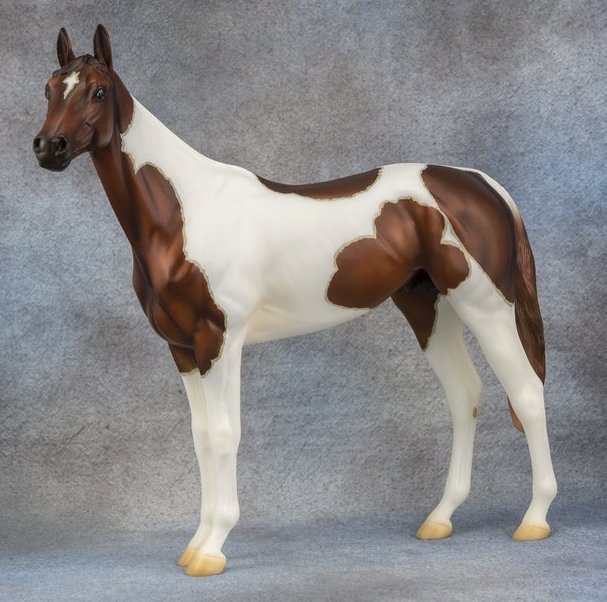 Then, the matte Bobby Jo

Next up, the DHS Test Model! Oh, such eye candy!!

And now moving on to one of my personal favorites, the Glossy Dapple Bay Marwari! Drool... 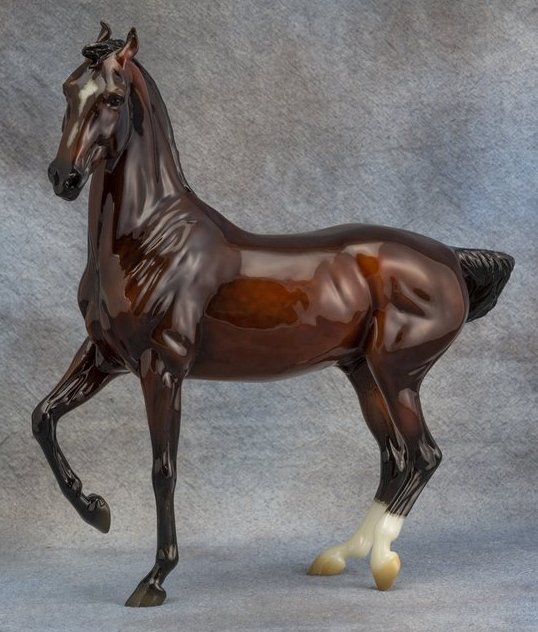 Next in line, we see the Open Show Champion Prize, the Frame Overo Shagya!

Moving on to the pearly Clydesdale Mare and Foal Set; they're nice, but not quite my cup of tea. 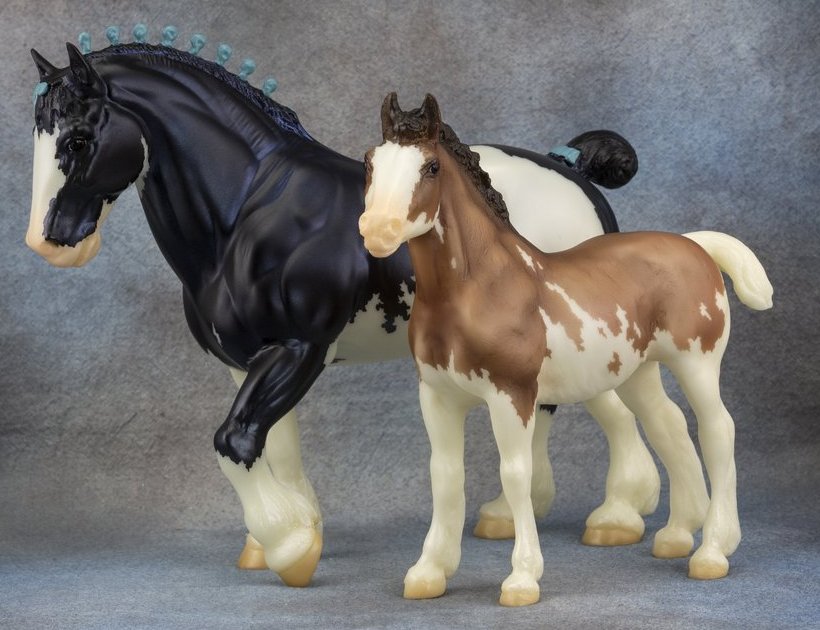 The Glossy Pearly Dun Champagne Silver is a combination I didn't think was possible! I didn't know a model could be both glossy and pearly! 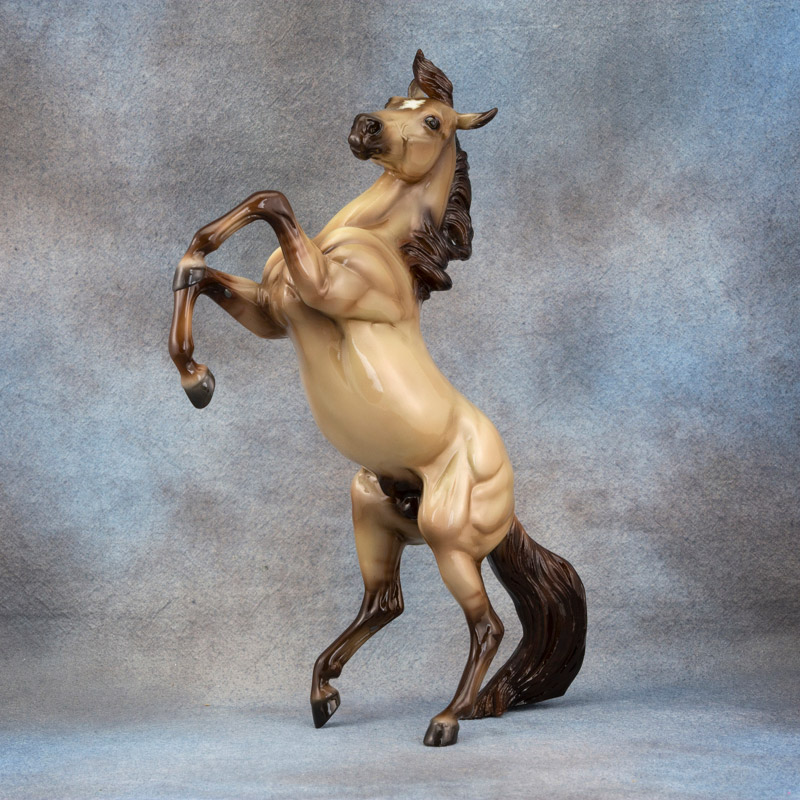 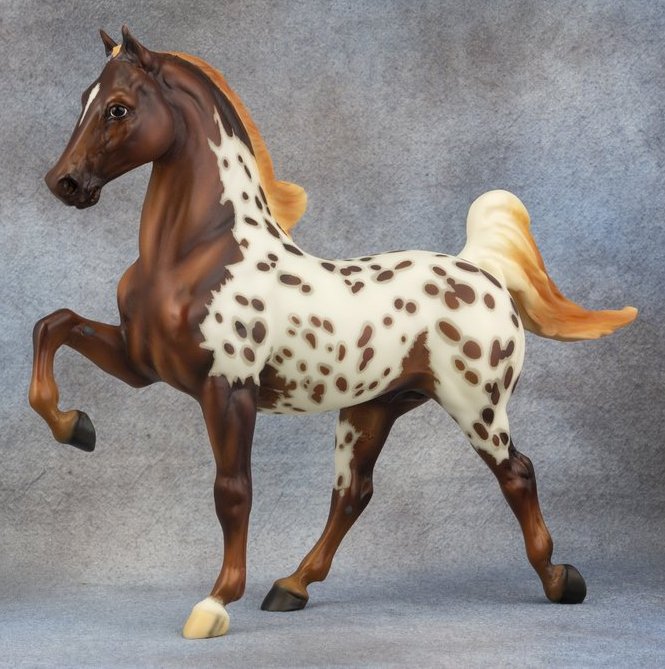 Yet another non-OOAK, North Star! 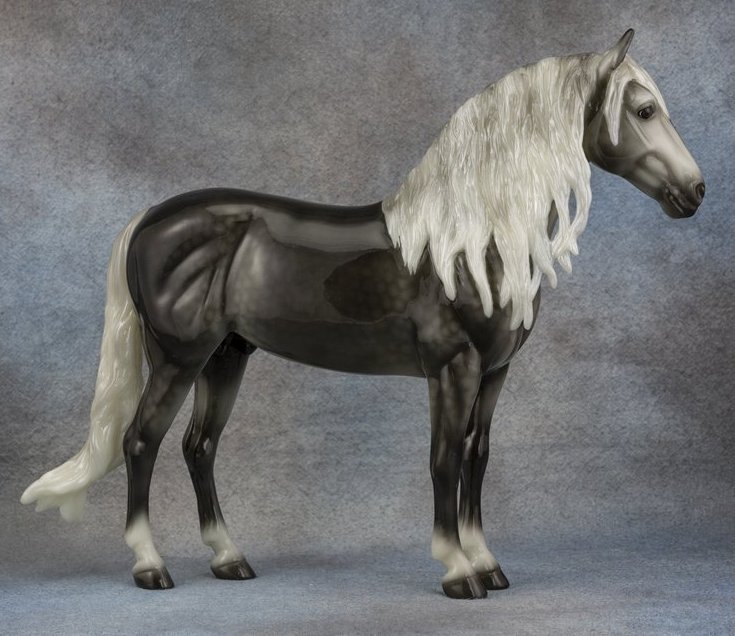 Wouldn't it be nice to own this lovely Chalky Giselle and Gilen pair? I know I would love to, but not for the hefty price tag of $4,500.

Just look at this blue-eyed beauty on the Mustang Mare mold! 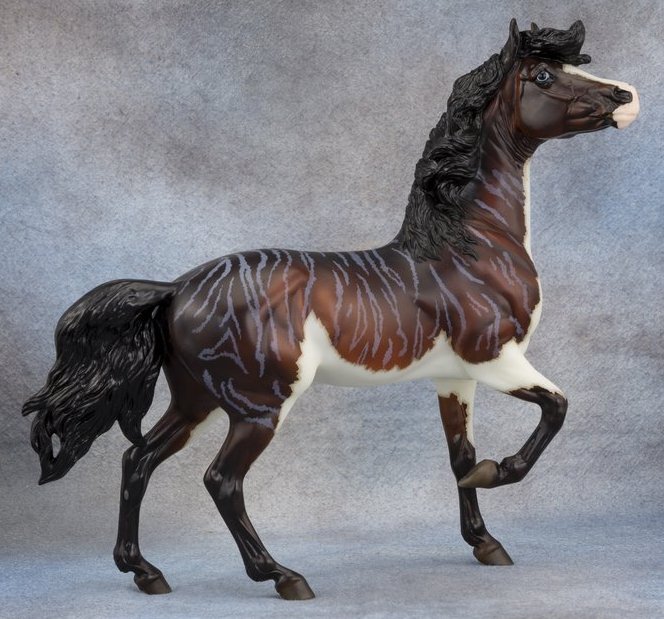 And now it's time for our first crossover, a Cantering Welsh Pony with Newsworthy's tail! 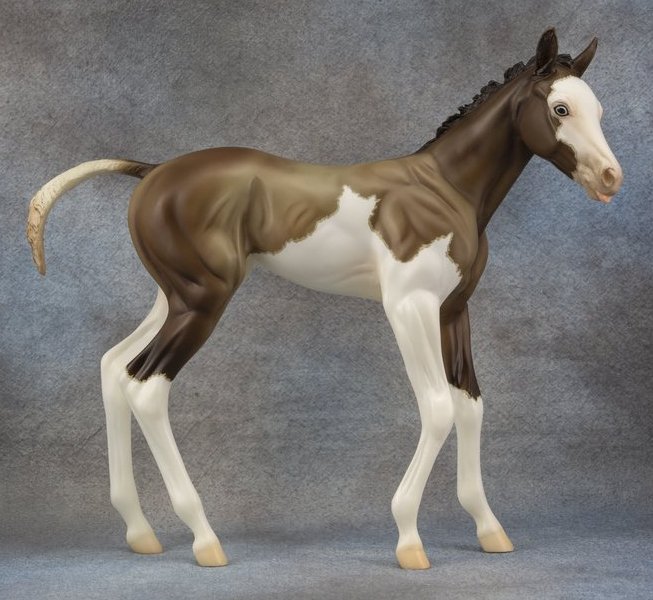 This blue Pearly Semi-Leopard Goffert is just off-the-wall stunning! I absolutely adore his silver mapping! I forget who owns him, but I've seen him on Instagram once or twice. 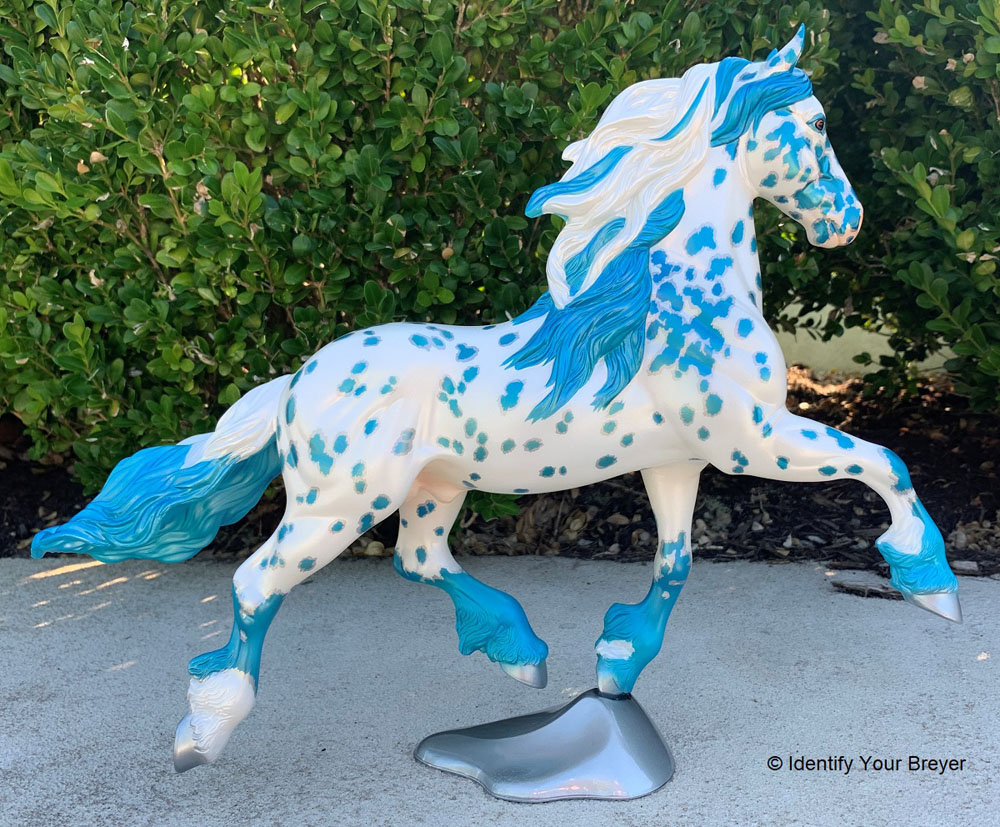 Apparently, this guy is glossy, however, in my opinion, he looks more semi-glossed. Either way, he's a beaut! 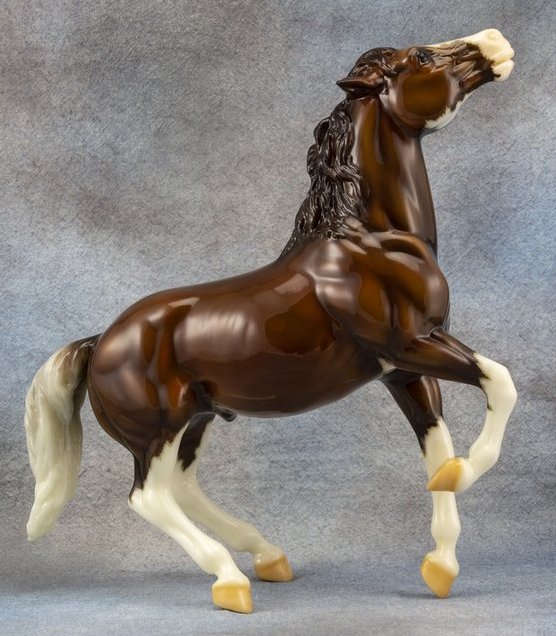 Moving on to the Chalky Indian Pony! I'll admit, this commentary is getting a tad boring, so bear with me!

Now on to this lovely Legionario III designed by Sommer Prosser herself! 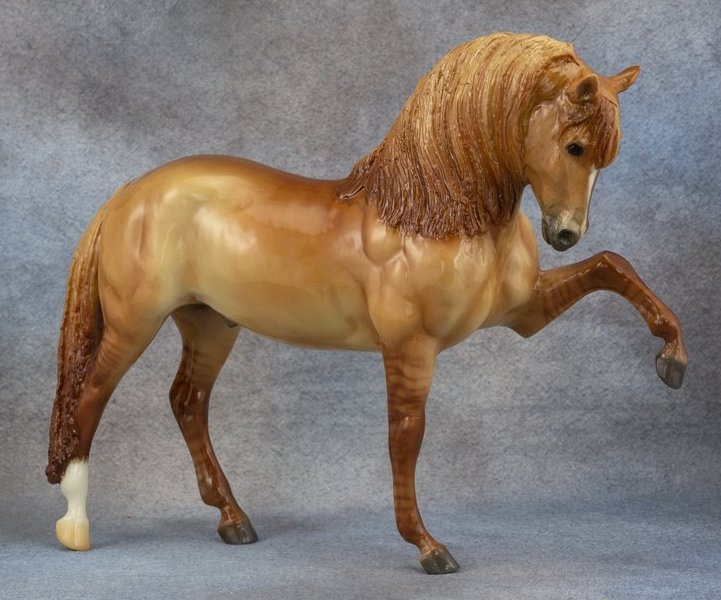 I think this Pearly Golden Cremello Totilas guy might just be my dream Breyer, and I've seen him also floating around Instagram. Some lucky duck his owner is! 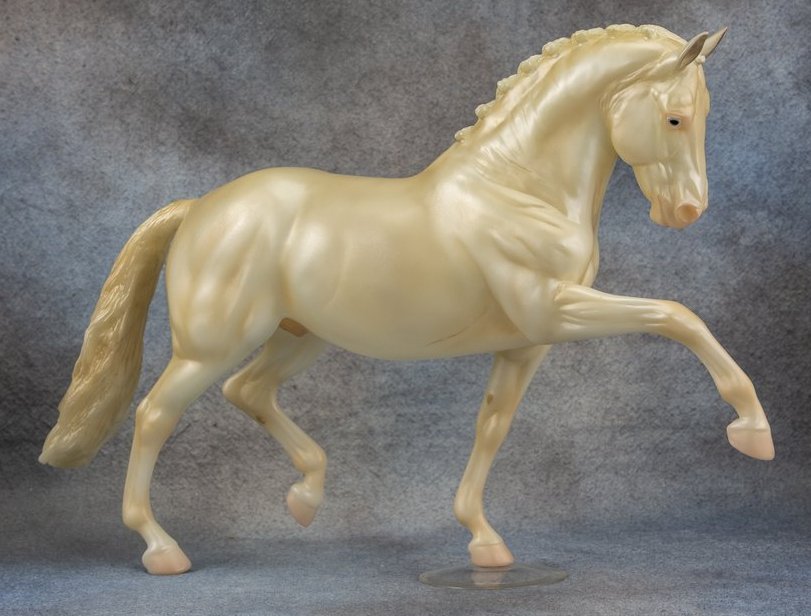 Also not quite my cup of tea are these three, but I can see the appeal! 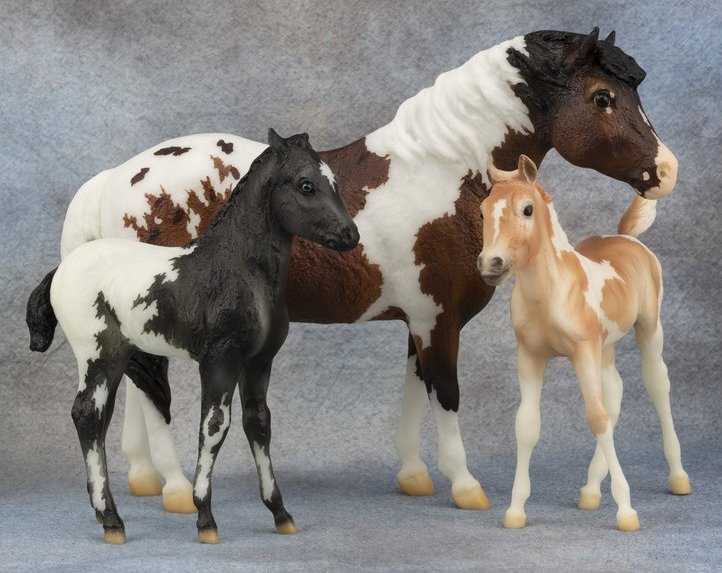 I believe I've seen him in the 'Gram before, too! 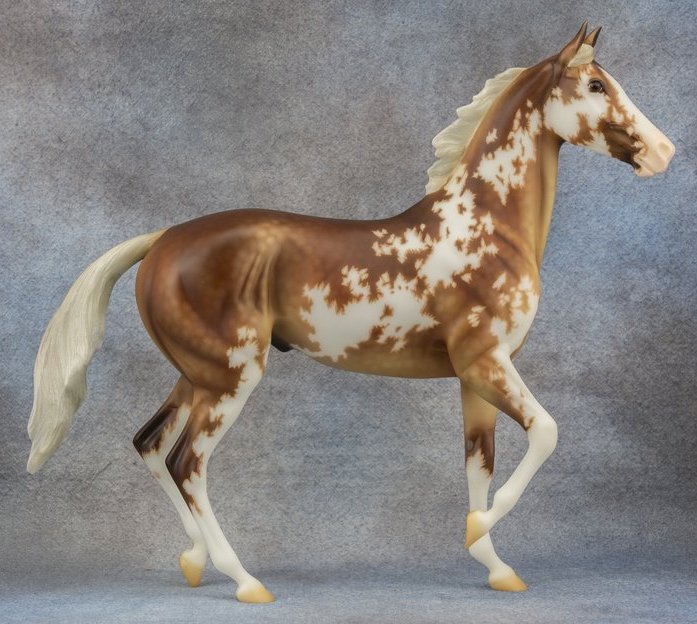 I had the pleasure of seeing this total stunner, a Glossy Rainbow Croi Damsha with golden mapping, in-person at Sea to Bay last month! And, might I just say, "drool-fest". 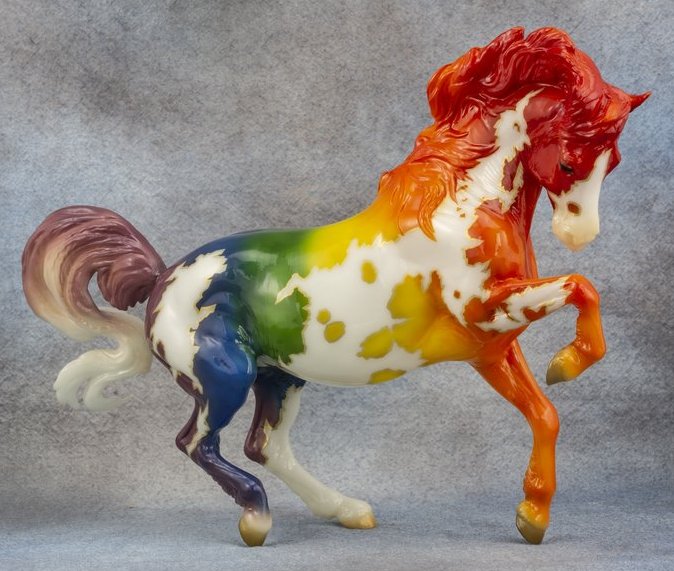 Back to Breyer's signature rose dapples, this cute Chalky Bristol is quite the showstopper! 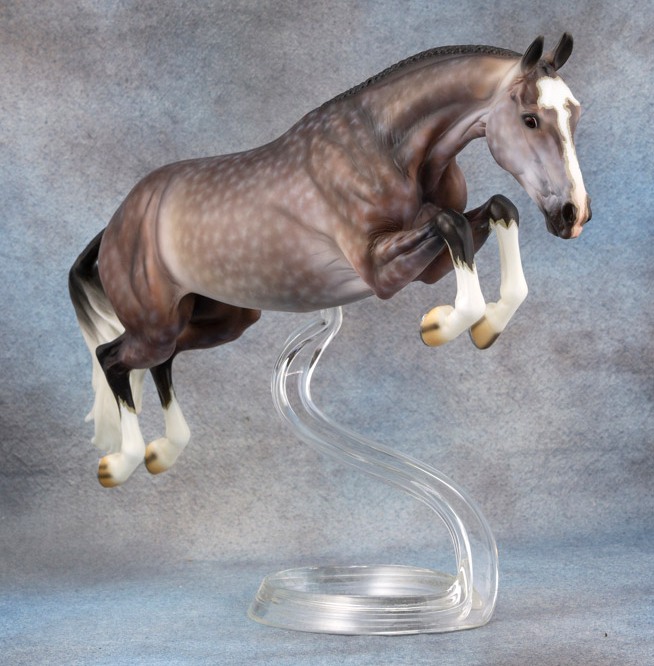 I think we're almost done! On to Honor and Valour, two incredible ponies. 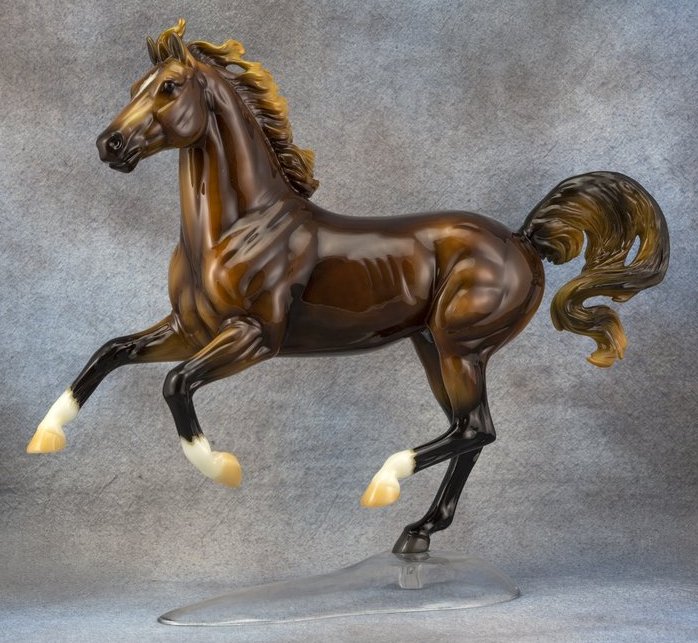 And now we have a marvelously painted Dundee! doesn't he look a heck of a lot like Karen Zorn's 2019 Best Customs Contest Finishwork entry?

Here's the PAM and PAF set! They're not quite my cup of tea, but I see their appeal! 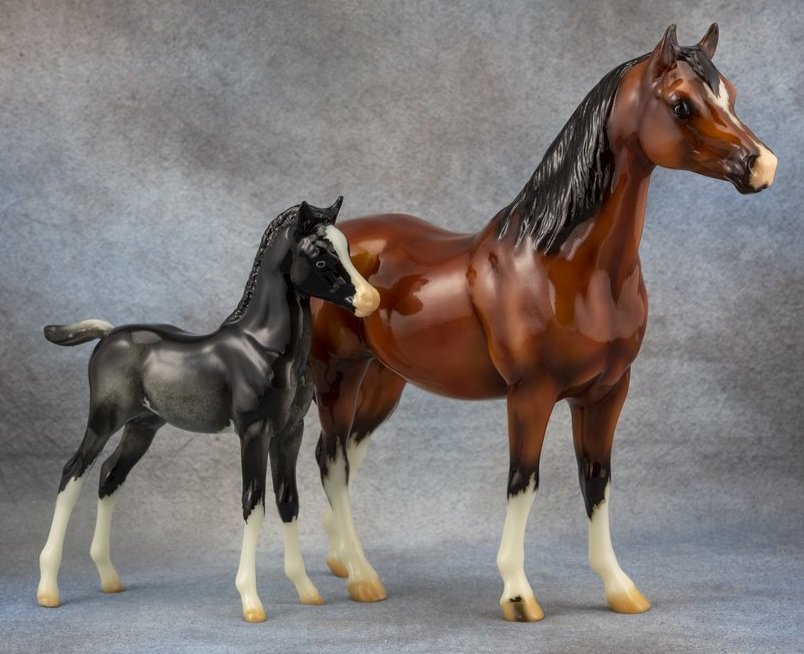 Might this Fighting Stallion look familiar? That's because he's the runner-up to the Who Wore it Best contest! 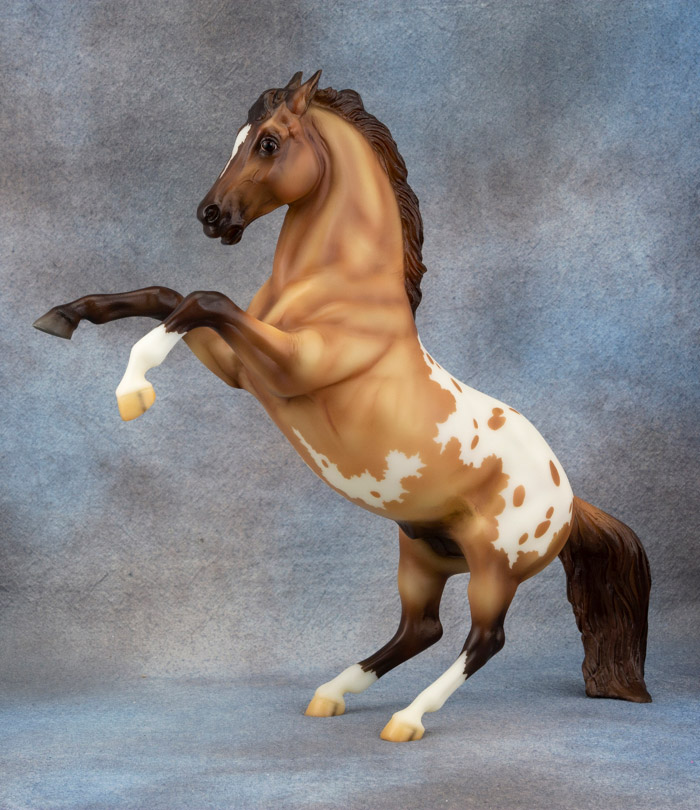 Last but certainly not least, we see the infamous Alborozo! 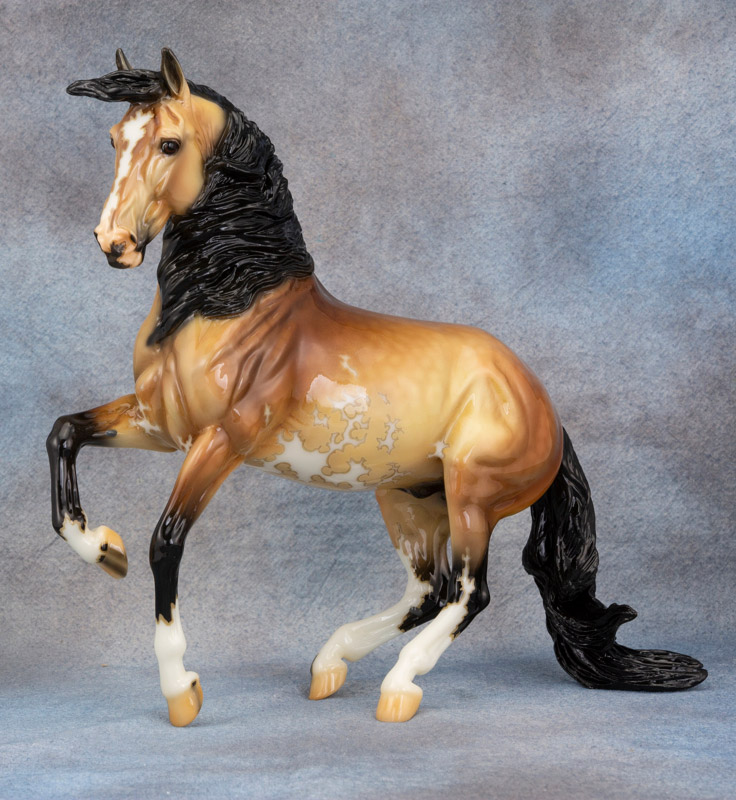 Moving on to the Silent Auction, let's take a look! 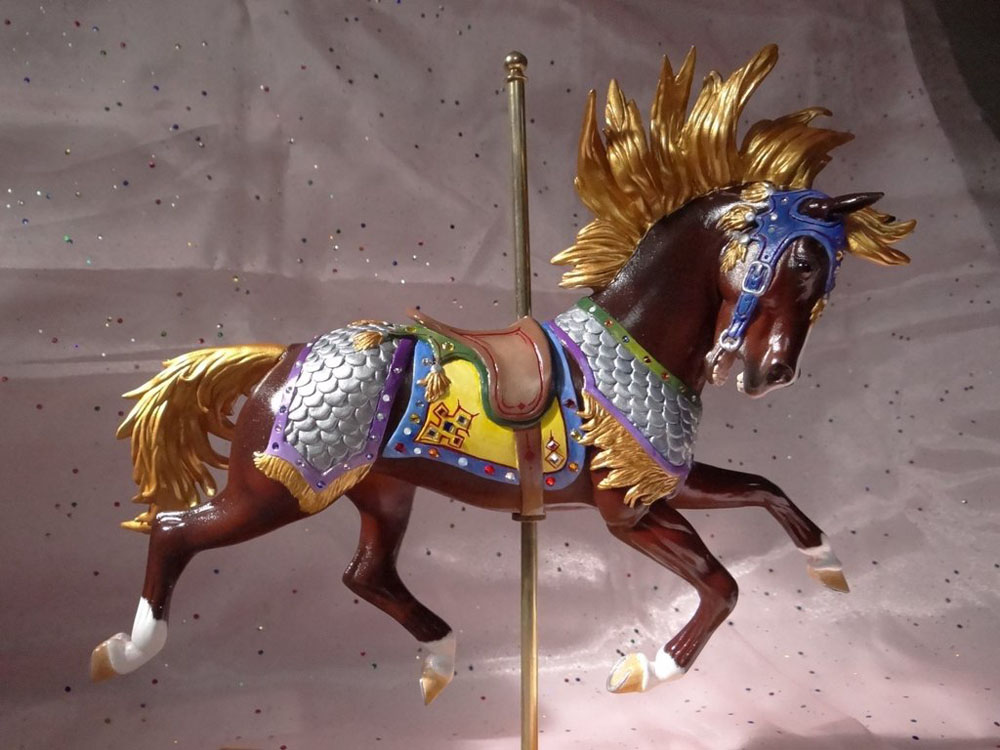 Here, we have the stunning El Dragon. 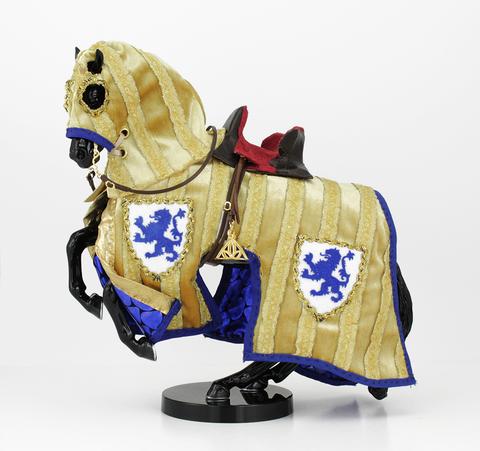 And the full set of Hero's Surprise horses: 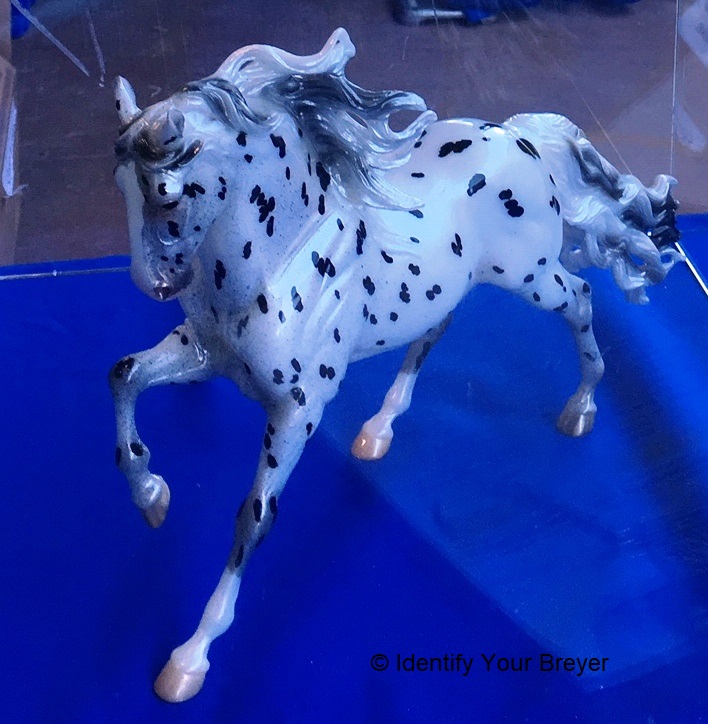 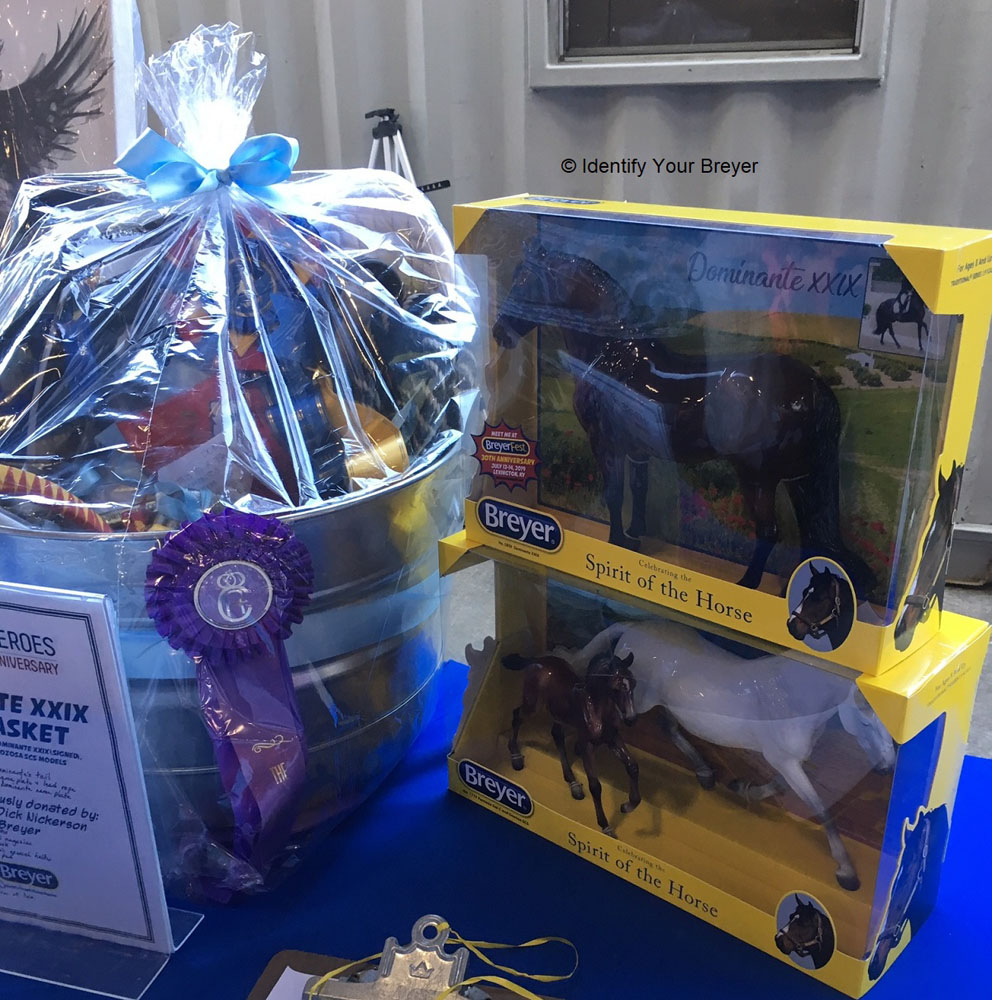 Can we just take a second to appreciate how stunning a glossy Out of the Blue looks?

I also got to see this cutie last month!

The drool-worthy Leap of Faith and Top Hat and Tails 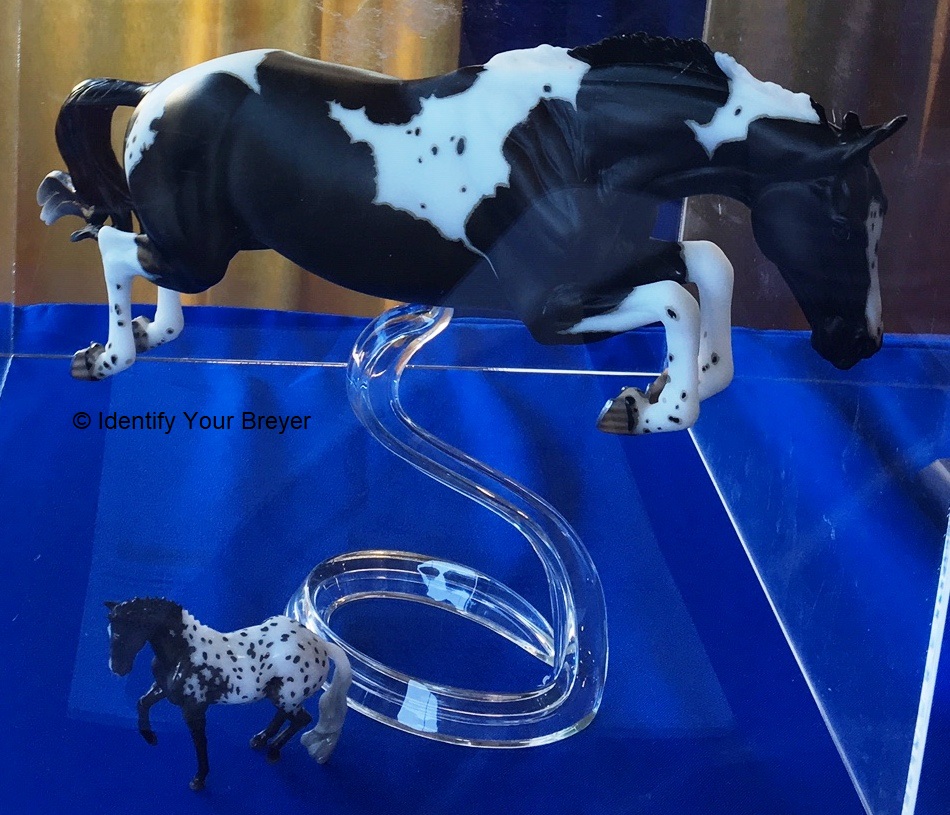 And to close out this loonnggg post, we have the stunning custom-etched Carrick! 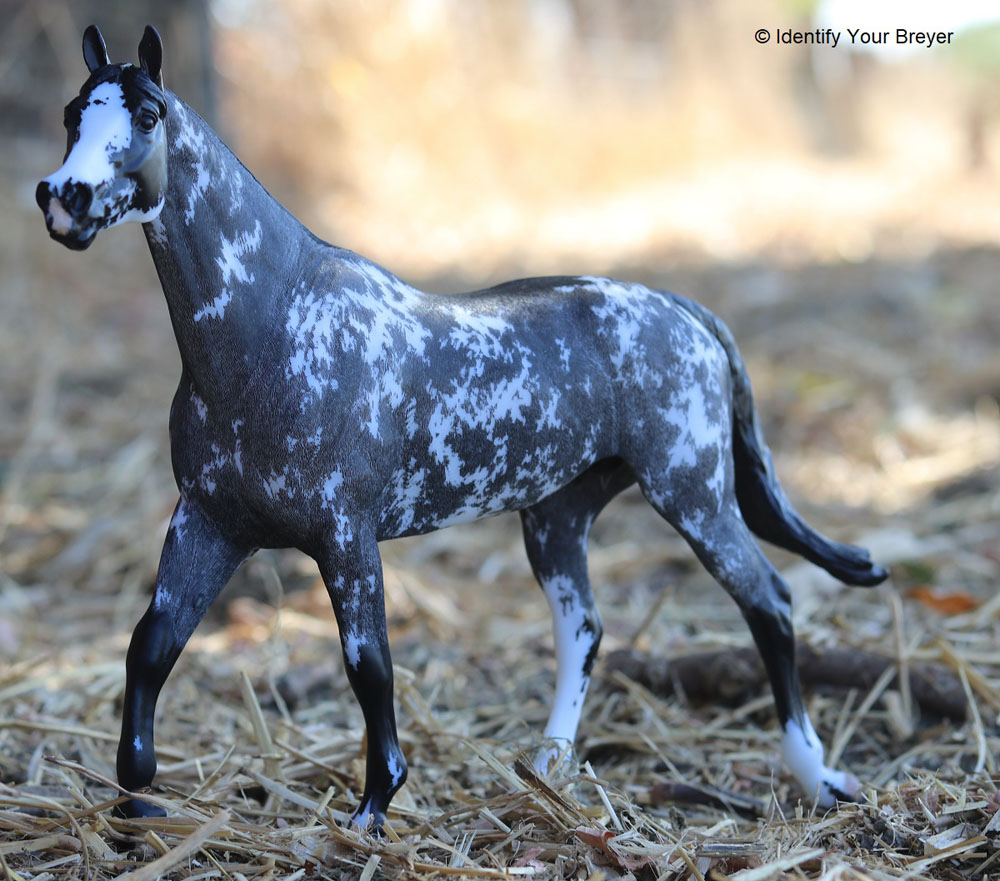 Tune in next week for my guesses! Until then, I hope y'all have a lovely quarantine and I look forward to hearing from you! Who do y'all think it's going to be? Let me know, and I'll be sure to include you in that post (retroactively too)!
on March 28, 2020 No comments:

Grace M
Hi! I've been collecting since late 2016, and I show in Region 9 (as of now, just halter, but I'm hoping to branch out to performance).

Imitation is the Sincerest Form

Some of My Favorite Blogs